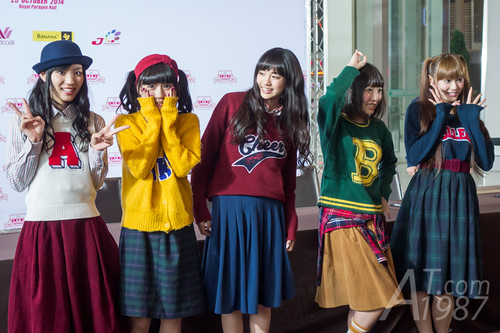 Last month there were 2 J-Idol live concerts in Thailand. One is FamilyMart’s ASIA COLLECTION BIG STAGE 2014 that Tokyo Girls Style participated. The other one is ANIME IDOL ASIA 2014 that was organized by the same team who organize Thailand Comic Con.

I am lucky enough to get both events tickets but I will write about AIA 2014 because it’s bigger event compare to FamilyMart’s. 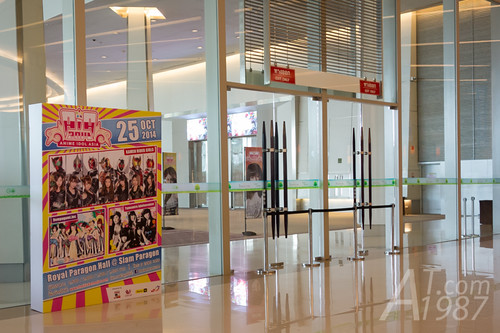 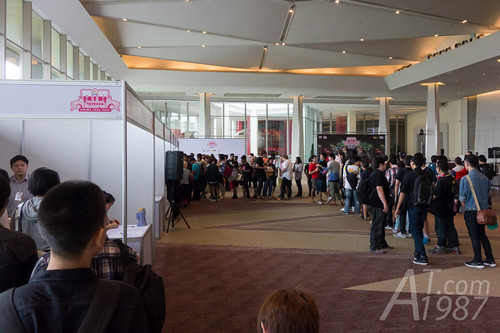 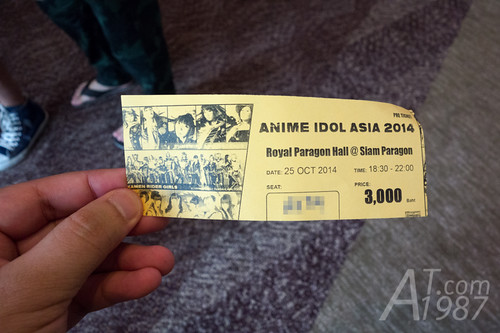 The organizer sold the VIP ticket for 3,000 Baht in August. They announce a selling date one week earlier. I was lucky enough for having some money but I was almost dead from running from the 2nd floor to the 6th floor of Terminal 21 to buy it. 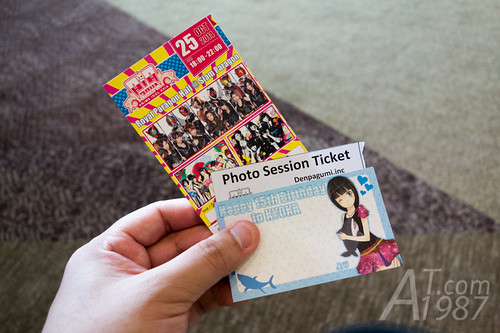 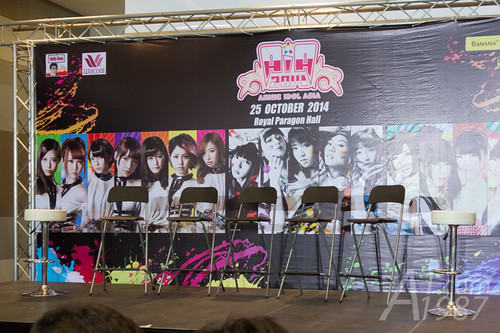 Only VIP ticket holder could access to the meet & greet panel inside. 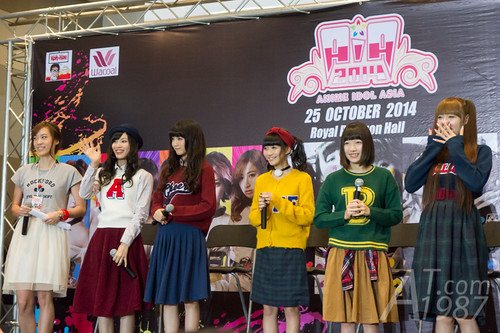 The first group came to the panel is Yumemiru Adolescence. They really missed Thailand because they needed to leave for Japan after the live ended last time. So they’re very happy when heard they would go to Thailand again and looked forward to it. 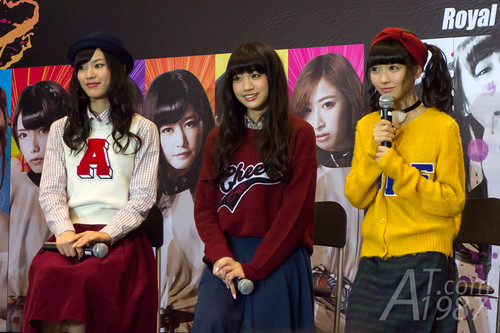 This time they went to Thailand before the event date so they had the time to enjoy shopping and ate Thai food. They said they like the fragrance of Thai jasmine rice. The things they also want to try is getting on Tuk Tuk. 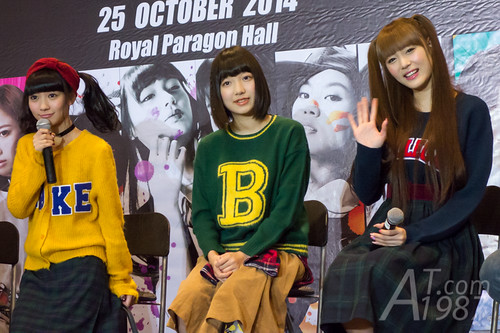 MC teased them about the speed of Tuk Tuk is like the roller coaster. Akarin told Thai ferry wheel runs faster than Japanese. Then they talked about the successful of their new single “Shoumei Teenager”. 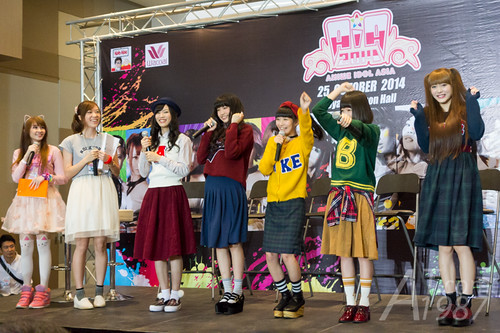 YumeAdo also announced that they were the regular for Thai TV program which will be on air on the next year. The next part of YumeAdo session is the questions from event fan page. Began with the question “What Thai word they want to say?”

Yumin answered that last time the word “mee tua mai” (Do you have a bean?) seemed to be very popular. So she want to know the current popular Thai word. Fans told her “phom nee yean kean lei” (I stand up!). However it’s too difficult for them so they wanted to train to speak it first.

Next is “Who teach them to use the Thai inhaler by putting it in the nostril?” They replied they see the event staffs did it. They also bought a lot of inhalers last time. Karin said there is Thai people warned her about this too. 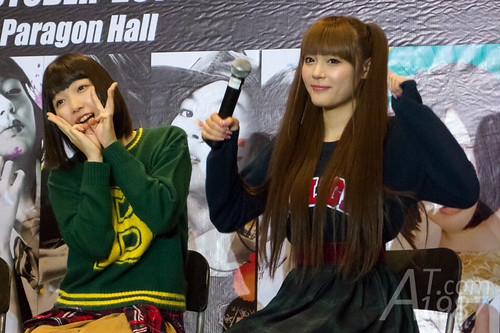 The good question I like most is if YumeAdo members aren’t the idol, what will they do now? Akarin will eat snack and sleep. Rei will be a normal student. Yumin will research about inhaler. Kyoka will dive to meet the shark. (She has the diving certification.) Karin will be the assistant at inhaler company.

The last question from fan page is which song do they like to sing in Thai? The answer is JUMP! So the MC taught them how to say the word jump in Thai.

Then the MC asked the question audiences want to ask YumeAdo members. Began with where do they want to go in Thai. Kyoka replied Pattaya beach. 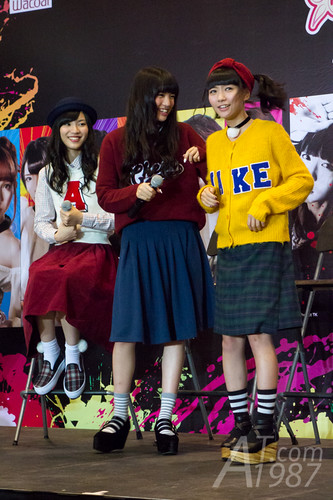 Fan asked them which martial arts do they like. It seemed they didn’t know how to answer it. Yumin and Karin stood up and tried to do some punch and kick on the stage. So MC suggested he will teach them Muay Thai.

Next is the question according to the earlier answer. If they sell inhalers in Japan, what odor they will sell. Yumin answered it must be Thai odor. Karin suggested Thai jasmine rice which Karin agreed. She also suggested Tom Yam Goong odor so she can remember Thailand. 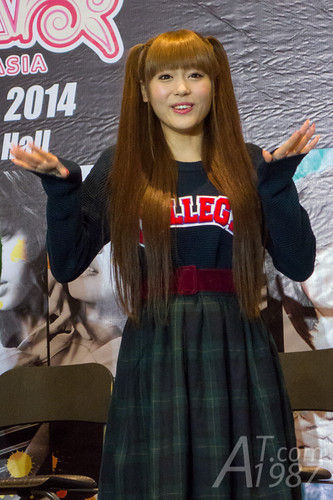 There was the question to test their idol skill. It’s the specification of the boy they like.

Karin answered she likes Mickey Mouse since he can do everything. Kyoka likes someone who look like a shark. Yumin an Rei like someone who has a kind heart like Thai people. Akarin likes One Piece’s Luffy and someone who can speak with chicks. (Her piyo piyo is the voice of chicks.) 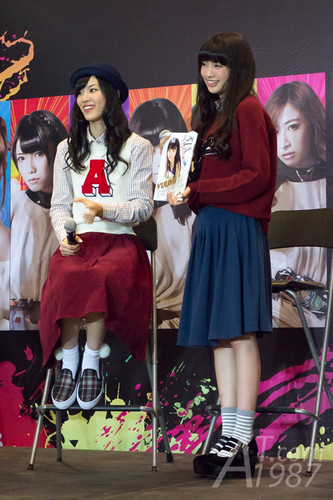 Finally it’s lucky draw time for who chose to have a photo session with YumeAdo. This time prizes were signed Yumin photo book and signed Shoumei Teenager single. 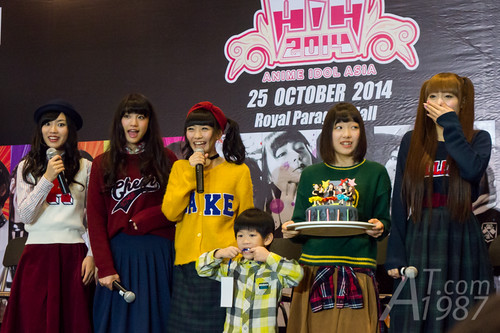 Because there are members who have the birthday around that time. The organizer surprised them by singing Happy Birthday song and giving the birthday cake to them.

That’s all of YumeAdo panel. Let’s see the next group.