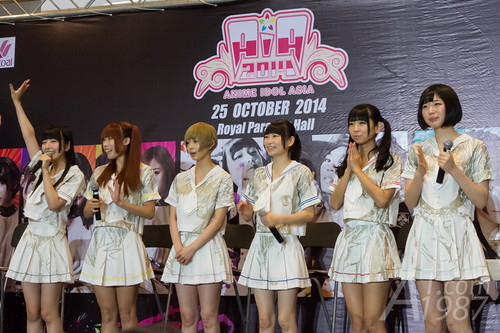 Next is Dempagumi.inc panel. The group consists of Akiba girls. I heard they are famous for their denpa song and live performance. So I really looked forward to them.

After greeting MC asked if they researched about Thailand before. Risachii told the members are interested in Thai food. They ate Tom Yam Goong on their first day in Thailand. Parsley is also delicious and they ate a lot because it’s very expensive in Japan. 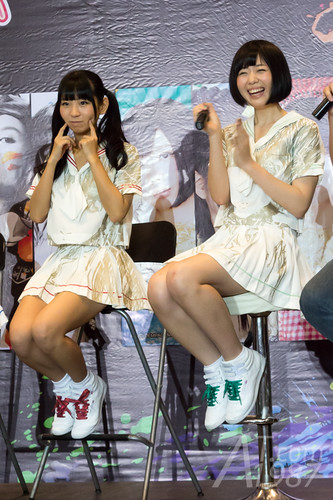 Next question. How’s Thailand? Risachii said the weather’s good since Japan was going to be colder. Nemukyun told MC she heard Thailand is the land of smile. Ei-chan added Thai people are good at smiling.

Then MC asked the members about their colors and catch phrases. The answer is the same as in the Wipipedia page but what’s interesting me is Pinky’s nickname is come from the figure Pinky:St. (I used to collect them in the past.)

Next is the same question as YumeAdo. If members aren’t idol, what will they do now. Risachii said everybody will be an otaku and stay at home. Nemukyun told Resachii’s answer was bad. She wanted to be bento seller. Ei-chan interested in bicycle and wanted to go to cycling trip. However they are otaku at last. 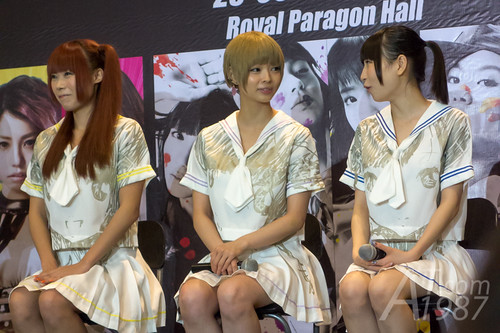 There was the question for Moga about her role as an android in the latest Ultraman movie. Moga replied she is very happy to have a role in the series she watched while was young. The group also told the concept of their new single “Dempari Night” that is the party song in Dempagumi.inc style. Nemu also said it’s like watching the circus.

MCs asked their las question. What’s behind the successful of the group? Nemukyun answered at first not all members wanted to be an idol. However they receive the fan support so they want to do their best for their fan too.

Next part is the questions from event fan page. Since Mirin-chan’s room is full of games. So how’s other members’ rooms look like?

Pinky’s room has a lot of costumes. Many of them are the costume she weared when she’s young. Ei-chan has a lot of manga books. She tried using them as the bed. However she doesn’t like it because she should respect them more. 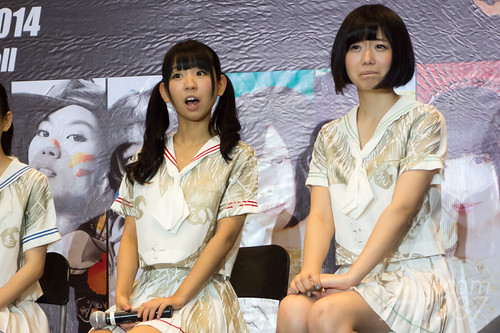 Risachii has a lot of lolita clothes and corsets. Moga has nothing in her room sicnce she keeps her PC and personal items in her hometown. So she can’t play online games and can concentrate to work. MC also asked her about how she plays the game with feet. She replied she have to control 3 characters. 2 of them can be controlled by hand so other have to be controlled by her feet.

Then fans in the panel asked their levels and weapons they used in Monster Hunter 4G. The member replied most of them are level 5 except Pinky who had just begun playing and Mirin-chan who is level 22.

About the weapons. Because I don’t play the game so I can’t write the name of their weapons. I only remembered only Moga answer that is she’s going to find it because she couldn’t decide which one she liked. 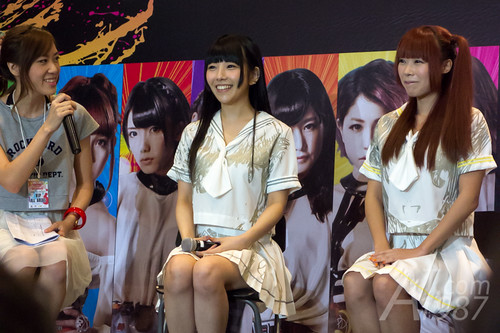 Dempagumi.inc gave away 2 signed single CDs. Unlucky I didn’t get it. 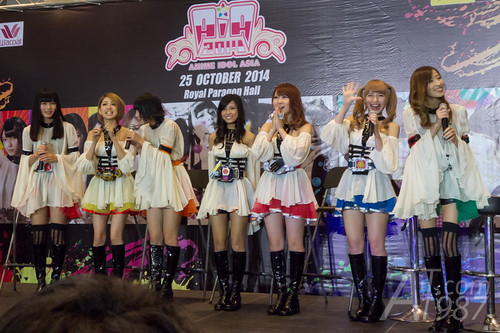 The last group in Meet & Greet session was Kamen Rider Girls who many Thai fans looked forward to. Other groups fans began to left the room.

MCs greeted them and asked did they miss Thailand after came to Thailand for Thailand Comic Con? Chisato told she remembered her trip to Thailand while wrote the new song. So she write the song about Thailand. She also wanted to go to Thailand again. Finally she came back again.

Nao also said she didn’t think that she went to Thailand again very fast. There were fans who were welcome them at airport so she’s going to do her best for fans. 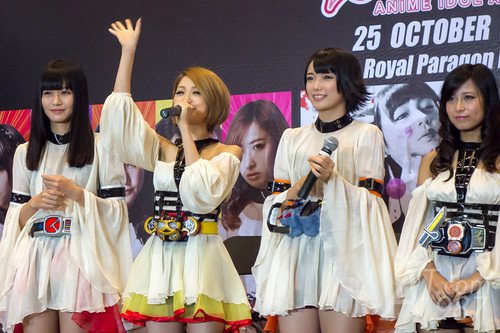 This time KRGS came to Thailand a week before the event so they could eat, travel and do their own missions. MC asked if they can stay in Thailand, how long will they stay? Kaori answered maybe we should move to live here.

MCs asked about radio and TV programs those KRGS went. They said the staffs helped them a lot. Fans also helped promoting by Twitter. Jiena’s very happy when she saw the fans waiting for the group at the airport.

There was the question about their latest single “Break the Shell” that members wore this single costumes on that day. Hitomi explained this single is the theme song for the new Kamen Rider console game. It reflects how lonely of heroes who fight alone.

Then fan page questions time. Other than their image Kamen Rider. Who are their favourite rider? Hitomi likes Kuuga because she watched it when she was child. Nao like Decade for his multiple form. Chisato likes W. Gina and Kaori like Den-O. Mitchan likes OOO because his multicombination tranform. Erika likes V1. 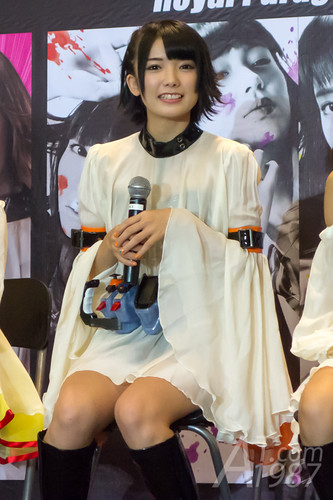 Next question. How do they teach Shocker to know love? Chisato would tell them to look for the future. Not stay in the past. Mitchan said she’s going to fight them. So they would be friends. (So Fourze like.)

Since KRGS members drank juice smoothies while stayed in Thailand. There was a question which fruit smoothies they like the most. Chisato like watermelon smoothies. Thai is sweeter than Japanese so she drank them everyday when she was here. Erika asked fan which fruit they should tried. Fans told them to try mango. Hitomi added she doesn’t like mango in Japan but it’s delicious in Thailand. 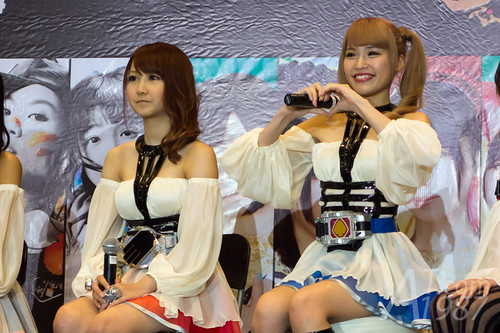 Then the time for fans in the panel to ask questions. Before it began MC asked fans not to asking about the latest Kamen Rider. (Maybe the license issue.) The first question is what’s the meaning of mammotsu that members usually say. Chisato told that it hasn’t any special meaning. It’s a mammoth. She found this word from auto complete function while she typed on the phone which she think it’s cute. So she uses it.

Next is about members Kamen Rider items collections. Nao collects the items that have the spade on it. Erika collects items from other Kamen Rider series. Hitomi kept a lot items from OOO so she don’t have the place to keep them. 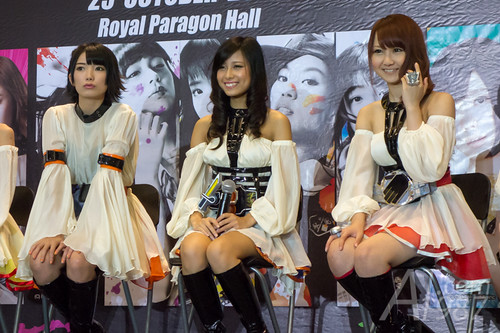 Chisato has Wizard’s belt and 200 rings. She also planed to buy 3 copies of Wizard novel. One for reading. One for display and one for keeping. Kaori has Kiva and Emperor figures beside her TV. Jiena has all Gaim’s lock seed. Mitchan collected Fourze’s gachapon. 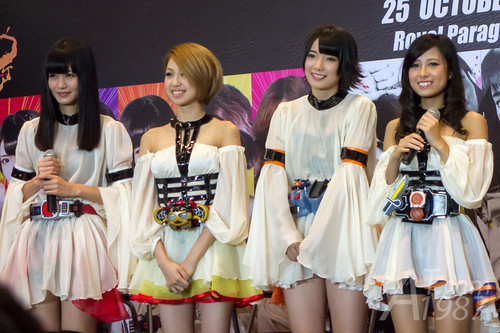 After this the staffs asked the fans who’re still the panel room for recording the surprise video. (Most of them left the room already.) It was screened in the concert in the evening.

Let’s see other sessions in the afternoon.