Other than stage performance, goods sale and games, there was a food zone where the easy to prepare foods such as hot dog and yakisoba were sold here.

I bought a hot dog because it’s easy to eat outside for the drizzling day. The seller (in the photo) asked me which sauces I would like to add. I answered her in English, pay money and take the change as usual. However I am certain that she isn’t a normal hot dog seller.

I learn later that the girl who sold my hot dog is KOTO. One of idols who participated the event. 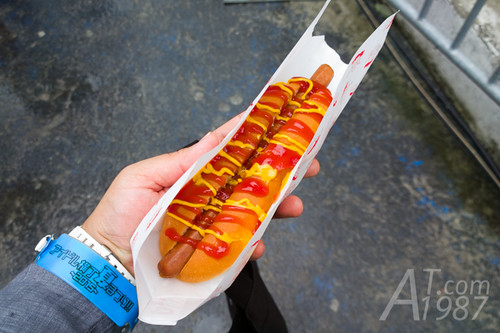 The hot dog taste is normal. Although it’s very expensive. (500 yen.) If I knew who made it first, maybe the taste would be better.

The shaved ice dessert shop yelo also sold their shaved ice here by members of Niji no Conquistador. I saw Nishi Nanami (Left person in the photo.) sold them at the time I was eating the hot dog. I really wanted to buy some but it’s inconvenient to have a big shaved ice while watching live performances. At the time I went back to buy it, the members weren’t here. I think they left to prepare performing live on the stage.

I think I may meet her with her group at the next AFA but unlucky she left the group about 3 months later.

I finished my lunch and walked back to tent stage to see lives of hip hop idols Rhymeberry and EDM idols groups Stereo Japan. Both Stereo Japan’s sub groups, Stereo Tokyo and Stereo Osaka (Now left Stereo Japan and renamed to Edge Dub Monkeyz), were on the stage. They performed one by one and then performed the last song together.

I think this is the best live in this event. I loved how these similar genre groups are scheduled to play next to each others. Stereo Japan’s producer also built more tension by firing party popper from the audience in the last song. You can see their tent stage performance in Anthem PV at 2:58. 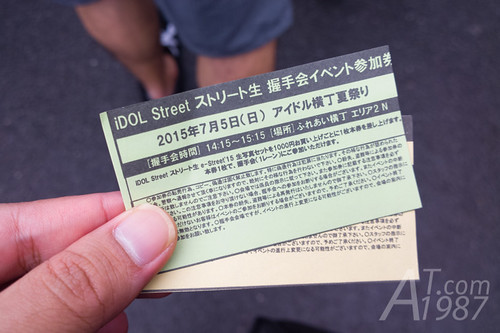 When Stereo Japan performance ended. I rushed to queue of e-street handshake event nearby since the queue was nearly closed.

The line-up of e-Street members is the same as the picture above. Members who I remembered are Sapporo’s Nattan (1st person), Akarinko and Airin from Tokyo. (The last 2 persons.)

I introduced myself and told them where I came from. They were surprised and looked happy. I was also surprise how young Akarinko is. She was 16 – 17 years old at that time but look more childish than polite Airin who stood beside her.

After I attended 3 iDOL Street. (GEM, Wa-Suta and e-Street) I think the handshake time is shorter than 48 family and Nogizaka46. I think it isn’t enough but if I take an another round, I don’t have a topic to talk with them.

After all I think to see the persons I admired in the close range and have a little talks with them. It is good enough for me.

After left e-Street handshake event. I watched Osaka Syunkasyuto and Yamaguchi Kassei Gakuen performances in the rain. Waited for the time of Cheeky Parade performance and they didn’t disappoint me. They performed great although the stage floor was wet. Audiences were also fun so some of them did crowd surfing with without their shirt.

After Cheeky Parade performance ended. I was very tried so I stayed in indoor to watch the performance on indoor stage.

I watched Wa-Suta performance for the first time. (I don’t count the one in GEM concert since I didn’t watch the whole performance.) It’s very promising.

This is my first time to see (almost) full members of Niji no Conquistador too. I watched their performance with 5 members around May. Too bad Moe-chan went to France so she wasn’t available.

One of the groups that I really wanted to see is Idolrenaissance. I think their performance was better than the one I watched last year especially when they performed 17 sai with idols from other group.

I saw GEM for 3 days in this trip. Their song Do You Believe? still made people dance with them.

The idol group I watched was Babyraids Japan. I haven’t been into their new songs like Koyomi no Ue de ha December and Rio-tan apathetic dance yet. Although I saw audiences enjoy their songs enough to do crowd surfing. Some of them were miss and fell to the ground.

While I was watching Babyraids Japan. Drunk man, who was brought inside by his friends to rest, woke up and throw a bag to the audiences in front of the stage. A brawling would happened if his friend didn’t apologies them. 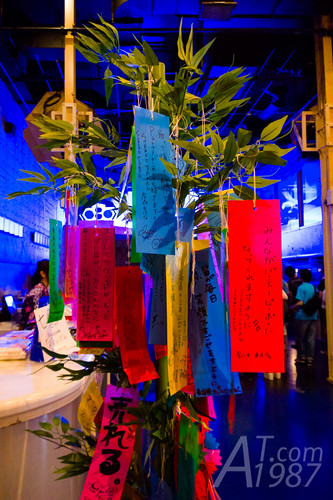 After Babyraids Japan left the stage. It’s rest time of indoor stage. So I took this chance to take photos of tanabata trees outside before leaving the event. 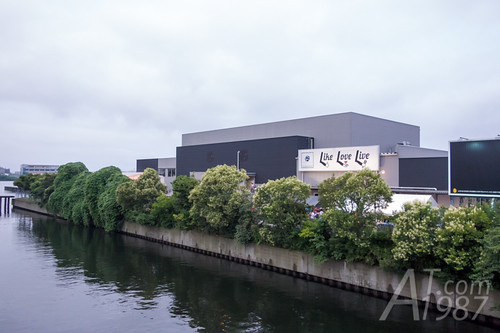 There had still a lot of people attained the event at the time I left. I really wanted to stay longer but I might miss my flight. 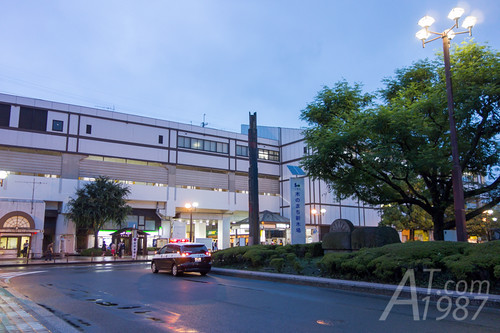 I walked back to Shin-Kiba Station to take a train back to Tokyo Station.

In my opinion, Idol Yokocho Natsu Matsuri has good amount of participated idols and various activities ีunlike the larger events such as Tokyo Idol Festival. However I think I haven’t seen all of the event. I missed some activities which I want to try but haven’t a chance to do it like fishing a toy goldfish and have idol signed on it at Tsuribori Yokocho. If I have a chance, I will go to the event again.

Next time I will continue to write about Amachan location tour again. Please look forward to it.